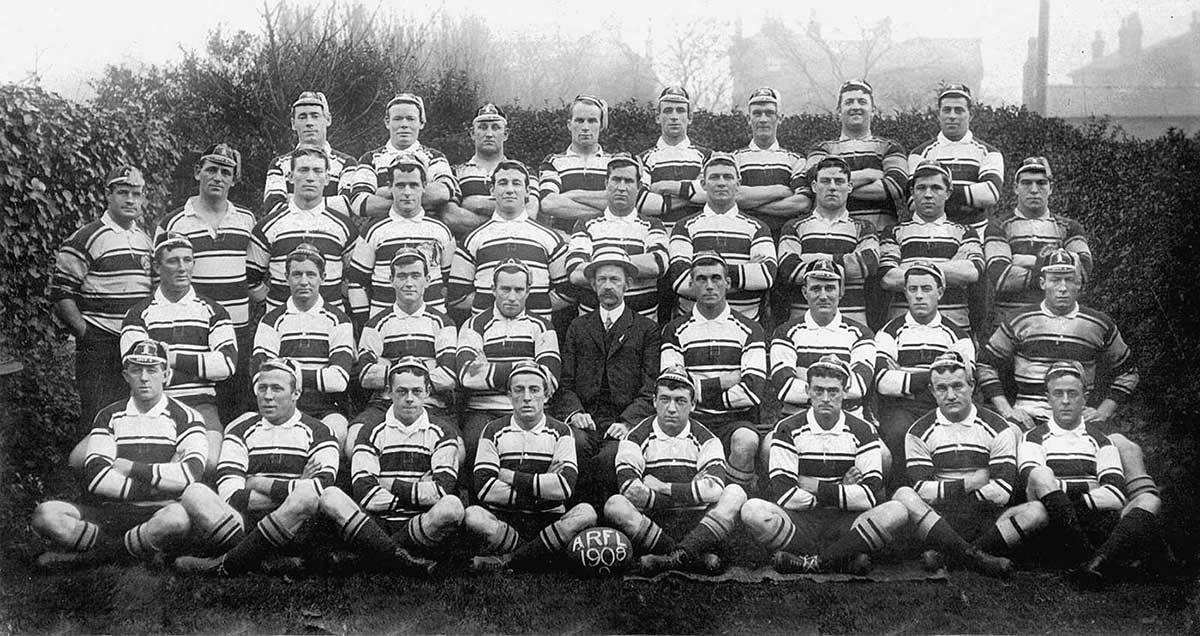 The match report, from the Merthyr Express is below...

It was an unexpected last-moment success that the elect of the Northern Union Welsh League achieved in their engagement with the Kangaroos, the professional Australian team now touring this tight little island home of ours, on the Penydarren Park, Merthyr. Indeed, the vast majority of the 6,000 spectators who lined the ropes concluded that the result at that advanced period of the game had been placed beyond doubt, and naturally resigned themselves to a Colonial victory. A pretty combined II movement by "Ponty" Thomas and Cowmeadow in the fleeting seconds of the encounter was consummated, and the huge crowd went home happy. By the barest possible margin-a single point was seemingly certain defeat turned to signal triumph, and that sufficed.

The Kangaroos, who fielded a strong side, Messenger, the brilliant three-quarter back, being the only notable absentee, kept up a vigorous, dashing attack at the out- let, which quite non-plussed their opponents. For the first twenty minutes or so the Welshmen failed to settle down to organised play, and it was during this period that their line was twice crossed. Dean, who figured at five-eighth, was the first on which the onslaught turned, and he opened up the game admirably. The initial point fell to Frawley, his partner behind the scrimmage, who notched a capital try after a good bout of passing, Devereaux failing to goal, Rosenfeldt was responsible for the second try. Snapping up the ball smartly when Paddison failed to field, and outpacing his pursuers, the speedy left wing planted his treasure under the posts after a run more than half the length of the field. The goal was placed by Abercrombie.

Thus, the visitors were eight points up ere the league representatives had really got into their stride. By this time both teams had become fairly well reconciled to the heavy going. The home pack now became more aggressive, gaining considerable ground by their footwork, D. B. Davies, Dan Lewis, and Dick Thomas being ever in the van. When opportunity offered itself Harrison was not slow to set the third line going, and Chick Jenkins and Cowmeadow, the latter particularly and in frequent succession, with sharp bursts spelling danger. It was left to Harrison himself, however, to open the scoring on his own account by gathering a short punt and grounding in a good position for Jenkins to augment. This success was soon followed by another initiated by Harrison, who gave up possession to Ponty Thomas, and here to Cowmeadow, the latter diving over in the corner.

With equal scores to their credit at the interval the teams renewed hostilities in grim earnestness. Ponty Thomas early came into prominence, and was only narrowly thwarted of his design. Then D. B. Davies and Dan Lewis got away with a clever dribble, and outwitting Boleswki, the former made sure of a try after his club-mate had failed to touch down the leather over the line. "Chick" Jenkins's goal- kick fell short. Retaliation was not long delayed, for after pressing hotay and being repulsed, Wa.lsh picked up in a loose scramble beyond the centre and set the Kangaroo backs in motion. Rosenfeldt, Devereaux, and Holloway participated in the movement, and the last-named registered a well-earned try, which Abercrombie majorised. The Welshmen, whose forwards seemed to have fallen away considerably, now recovered remarkably, and the visitors' defence was severely tested. A likely opening was attempted by Paddison, but he was deliberately tripped when following up, and after "Chick" Jenkins had essayed an effort on the right, play veered to the other wing, and just on the call of time Cowmeadow gained the .winning try, which put his side a point ahead and wrested victory for the Welsh League.

The game, on the whole, provided a pretty spectacle. It was one of ever-changing phases, enlivened with many attractive features. Frequently in a flash the scene of operations was removed from one goal-line to the other and, on that account, the interest and excitement were kept at concert pitch throughout. On the run of the play a draw, perhaps, would have been an equitable result, although the league representatives are entitled to the fullest measure of praise for their splendid accomplishment. Fore and aft the players did exceptionally well, and in the back division none is more entitled to congratulation than Cowmeadow, who was in brilliant form. Both tries to his name were cleverly conceived and consummated. Partnered by Ponty Thomas, whose defensive work was worthy of his reputation, this wing was a constant source of danger to the opposition. “Chick" Jenkins could not be improved upon, and his sharp punting and sprinting proved to be of the utmost value. At the roar of the scrimmage Howel Rees and Harrison co-operated satisfactorily, the latter displaying fine resource when in difficulties. There was good cohesion in the pack, due in a marked degree to the presence of no fewer than four Merthyr forwards. D. B. Davies, Ban Lewis, and Dick Thomas, who shone equally well in the tight serums and open play, chiefly caught the eye, and Bevan's speed was useful in hard following up. Little fault could be found with Paddison, who tackled well and kicked a good length, although he might have averted the opening score against the league.

The Kangaroos were a well-balanced team and there can be no gainsaying the fact that they furnished the majority off the most sparkling incidents which illuminated the struggle. The backs handled the heavy, mud-coated ball with splendid accuracy and precision, and their movements, which were appreciated at their proper value, generally gained ground, if nothing more material. Of the quartet Devereaux and Rosenfeldt were the choice, the latter, with Dean, who was the star artiste of the Colonial and performed prodigies as the link between Holloway and the three-quarters, quite taking the popular fancy. The front line was best represented by Abercrombie, Courtney, and Walsh, and until sustaining an injury, which necessitated his retirement fro2r the fray some ten minutes before the end, Dobbs put in a lot of sterling work. In Boleswki the visitors have a daring and excellent custodian, whose play reminded one of the famous Marsburg, of the Springboks.

SUMMONS AGAINST N.U. OFFICIALS FOR TRESPASS.

By arrangement the Northern Union match between the Kangaroos and the Welsh League was allowed to be played on Saturday on Penydarren Park, instead of in the College Field, Merthyr. But the Merthyr Amateur Club forbade the use of their press-box for the occasion, and kept it closed. In order, however, that the reporters might be properly accommodated the box was forced open and the members of the press were put into possession. As a sequel to this Mr. W. T. Jones, secretary of the Amateur club, applied at the police court on Tuesday for a summons for malicious damage against Mr. J. B. Evans, treasurer of the Merthyr Rugby Northern Union Club, the damage being assessed at 5s. The summons was granted and made returnable for Tuesday next.