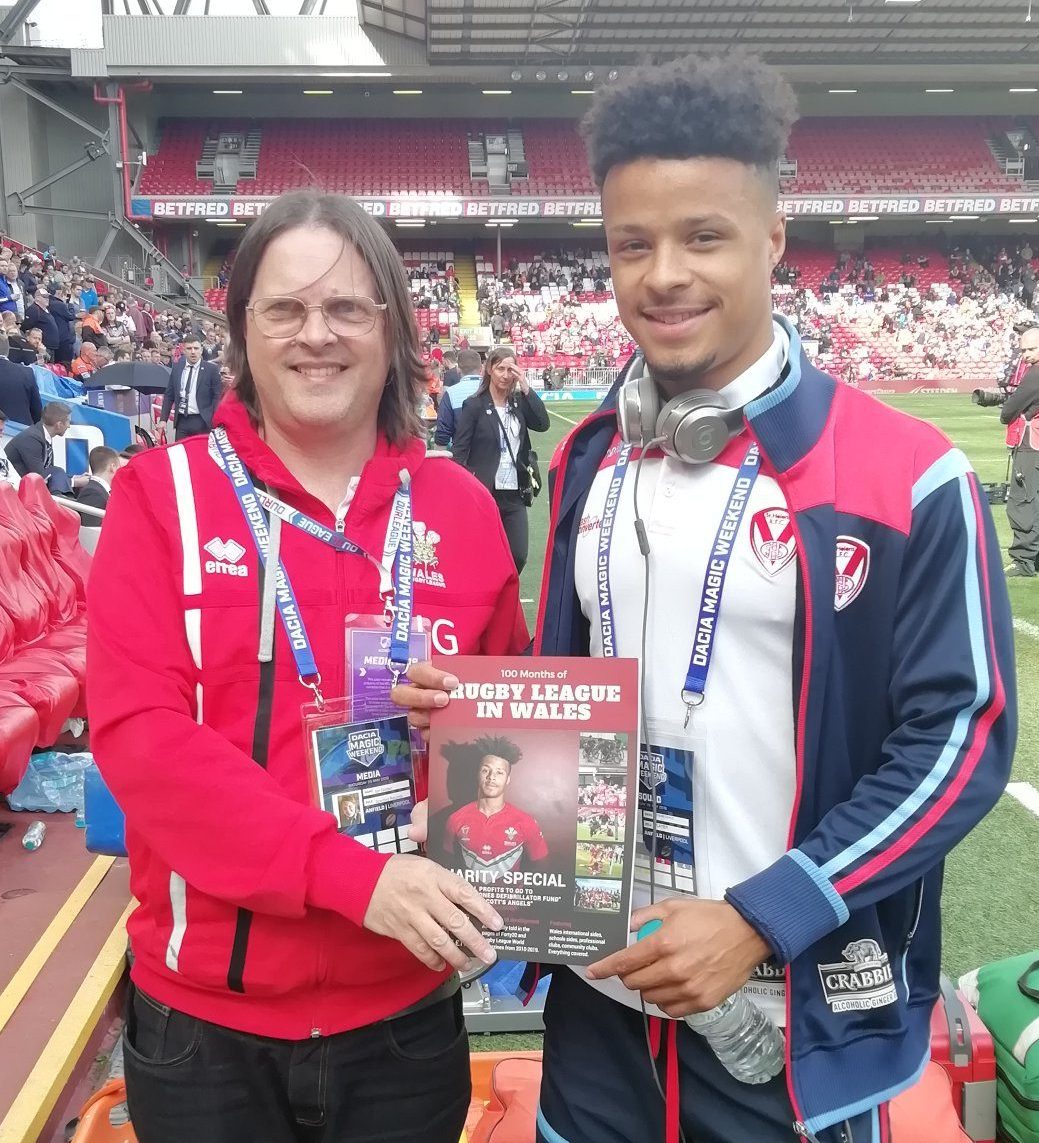 ORIGINALLY £10 BUT NOW REDUCED TO CLEAR

Payments are taken via the Sporting Records Online Ltd Paypal account. Purchasers do not need to have Paypal to buy, you can use a credit or debit card. All profits go to “The Danny Jones Defibrillator Fund”.

The “The Danny Jones Defibrillator Fund” raises money to purchase defibrillators for community rugby league clubs and junior teams across the country. These defibrillators cost around £1,000 each and provide potentially life-saving treatment to anyone suffering a cardiac arrest.

During a League One match on May 3rd 2015, Keighley Cougars’ Welsh international Danny Jones was substituted in the fourth minute of the game after reporting feeling unwell. Soon after he went into cardiac arrest. A post-mortem revealed that the cardiac arrest was caused by a previous undetected, hereditary, heart disease.

This publication also used to raise money for the family of former rugby league player Scott Bessant, who turned out and coached for Newport Titans and Torfaen Tigers as well as winning caps for Wales Dragonhearts. In the early hours of August 13th 2017, Scott was found unconscious. It was later diagnosed that he had multiple fractures to his skull, a fractured neck, broken ribs, a fractured pelvis, and since then he has had multiple strokes. No witnesses have come forward to any attack and the police have found nothing. Sadly Scott died in 2020.

WHAT IS IN THE MAGAZINE?

Full details of all the contents can be found on Twitter posts, seen by clicking here.

During that time, there have been major achievements for the Wales men’s side in the European Cup, the Wales Wheelchair side in both the World Cup and Celtic Cup, and Wales Students in the Home Nations and World Cup. Wales have won bronze in the Commonwealth Championships and the Wales under 16s have beaten England.

Also, domestic teams like North Wales Crusaders, South Wales Scorpions, Valley Cougars, Torfaen Tigers, West Wales Raiders and Bridgend Blue Bulls and others have flown the flag for Wales with some taking home national trophies. There have also been achievements from schools like Glantaf, Ystalyfera and St Joseph’s.

In addition to the 100 columns that tell the stories of the ups and downs of rugby league in Wales, articles and Rugby League World Cup reports from other top writers are also included.

Matt Anniss opens the magazine telling the story of the state of the Welsh game in early 2010 and also chronicles the history of rugby league in Wales. Following that, Ian Golden has bridged the gap by writing an exclusive report on the ups and downs (mainly ups) of the 2010 season before the 100 months begin. In addition, there are other contributions from Luke Ambler, Phil Caplan, Sian Golden, Ryan Gould, Dave Hadfield, Mark Andrew Jones and Steve Mascord.

Finally, there are full reports from every Wales men’s World Cup matches, including qualifiers, and full results lists from all of Wales’ international sides – Community, U16, U19, Students, Wheelchair, Nines and the men’s side.

Golden wrote for Rugby League World until April 2015 before his column was transferred to Forty20 following a restructure of the former. Both magazines now feature monthly columns on rugby league in Wales with “Tan-y-Ddraig” (translates as “The Dragon’s Fire”) appearing in Forty20 and “Breathing Fire”, which was relaunched in Rugby League World in April 2017 by Ryan Gould. 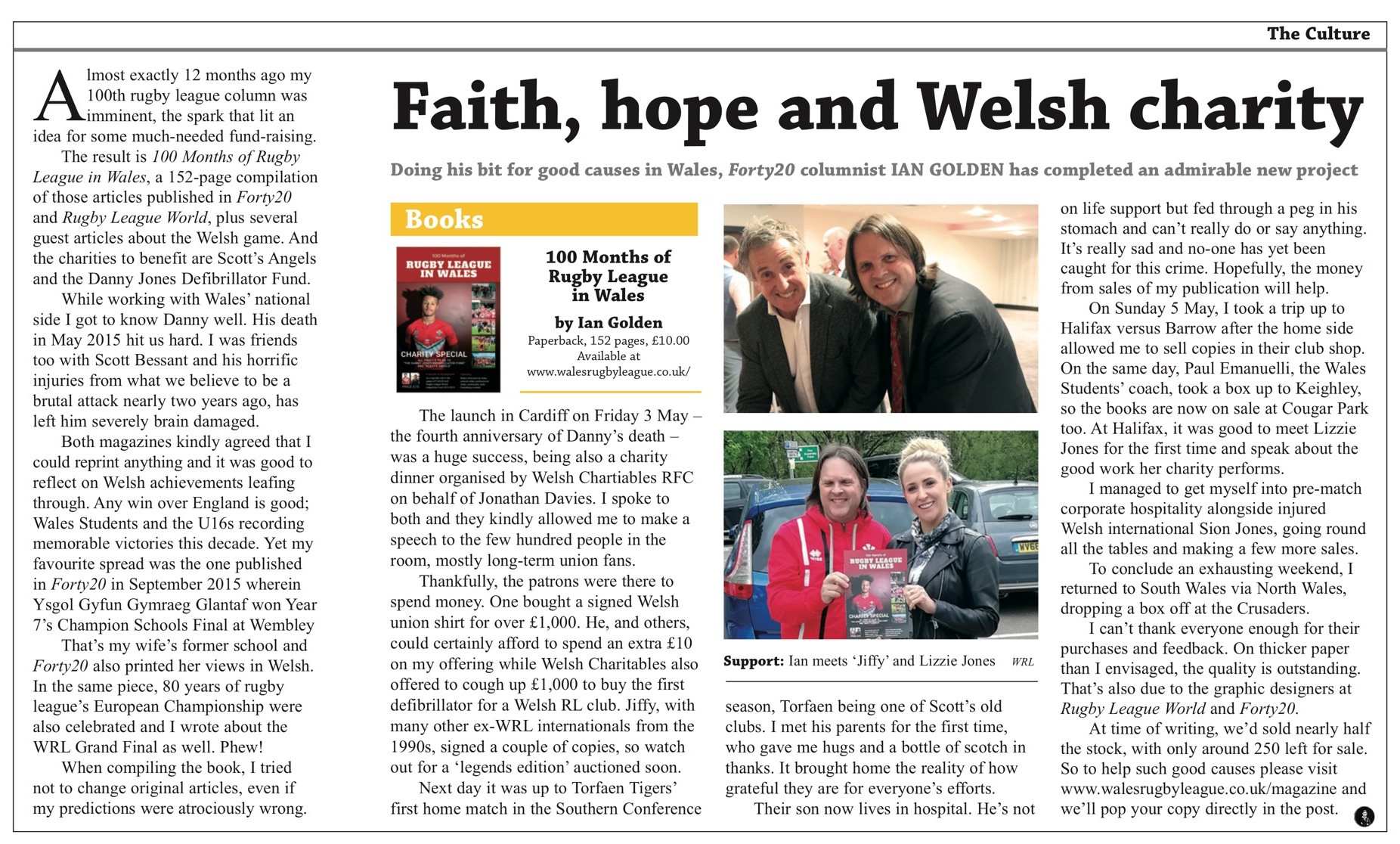 Danny Jones’ widow, Lizzie Jones, who, along with the Rugby Football League Benevolent Fund, created “The Danny Jones Defibrillator Fund”, said: “The legacy that Danny has left is priceless. The lives that the fund has saved and changed so far is more than I could have ever imagined. Initially I set out to save just one family from going through what we went through. This has happened as well as lots more. The support I have received for the charity has been overwhelming and it continues to grow every day. Thank you.”

ORIGINALLY £10 BUT NOW REDUCED TO CLEAR

Payments are taken via the Sporting Records Online Ltd Paypal account. Purchasers do not need to have Paypal to buy, you can use a credit or debit card. All profits go to “The Danny Jones Defibrillator Fund”.