Danny Ansell - Half back 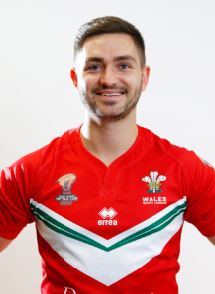 The nephew of another former Wales international in Barry Eaton, Danny qualified for Wales via the grandparent rule and played for Wales in the 2017 World Cup in Australia. He played junior rugby league for the Stanley Rangers ARLFC before being signed by the Huddersfield Giants, but after not breaking into their Super League side, he played for most of his career with Hunslet Hawks, kicking 103 goals in 83 appearances, as well as turning out briefly for Swinton Lions and Dewsbury Rams.