David Davies - Half back 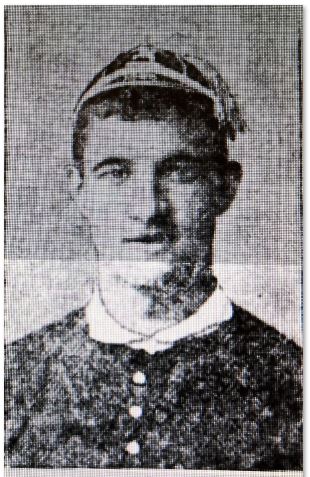 His association caps were in 1904 against Scotland (1–1), and Ireland (0–1), and in 1908 against England (1–7) as a half-time substitute for the injured Stoke City goalkeeper Leigh Richmond Roose who was replaced in the 15th minute until half-time by defender Charlie Morris. Davies was attending the match as a spectator and at half time, with Wales four goals down, the Football Association officials and Woodward, the England captain, allowed Davies to play in goal for the remainder of the match.

In rugby league, his lone cap was while at Swinton in the 13–39 defeat by England at Coventry on 10 December 1910.

Starting off in rugby union at Llanelli RFC, he was part of the team captained by Owen Badger that lost only once in 31 matches in the 1896–97 season; he scored a try in the win over Newport in February 1897 that was described by the Daily Chronicle as being for "the club championship of the United Kingdom".

Joining Swinton in 1899 after signing in a Llanelli shop window for £20 (£5 in advance and £15 on arrival), Davies played, and scored a try in Swinton's 16–8 victory over Salford in the 1900 Challenge Cup Final during the 1899–1900 season at Fallowfield Stadium, Manchester.

Davies joined Bolton Wanderers of the Football League First Division in the summer of 1902, having only attended one Association Football match and never having handled an association ball.

A year later, in April 1904, Davies played in goal in Bolton's 0–1 defeat by Manchester City in the FA Cup Final at Crystal Palace, London. Despite being on the losing side, Davies "had a good match" and made a number of fine saves, he was only beaten once, by fellow Welsh international, Billy Meredith.

He returned to Rugby League with Swinton in December 1909 where he played alongside his brother Dan, who himself won a cap for "Other Nationalities".

Davies retired from rugby age 33, and served with his brother in "E" Company (known as the Swinton Pals) of the 2nd Salford battalion, the 16th Lancashire Fusiliers during World War I, spending time in a French hospital due to an illness unrelated to the fighting. Davies organised the sporting activities for the 'Swinton Pals' at their First World War training camp in North Wales. After the war Davies assisted Swinton Park ARLFC.