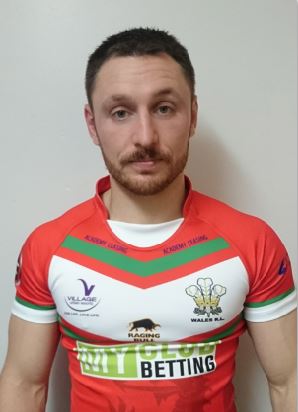 Phil Carleton started playing rugby union in boarding school at aged 14. When graduating, as he had a Welsh mum, he decided to move to Wales for university, he played for Wales Students and played both codes of rugby locally. Moving back north, he played for Gateshead Thunder, then returned to Wales and played for South Wales Scorpions, scoring one try in 33 appearances. His final rugby league match was his lone Welsh appearance. After that, he took up coaching and was head coach at Cardiff Demons and then South Wales Scorpions. Assistant coach at West Wales Raiders for a couple of years, he then took up a coaching role at Cross Keys in rugby union. In addition to rugby coaching, Phil took up powerlifting and won the UK and World Open Powerlifting Championships in 2016. He nearly repeated this in 2019, coming second in the World but first again in the UK Championships.