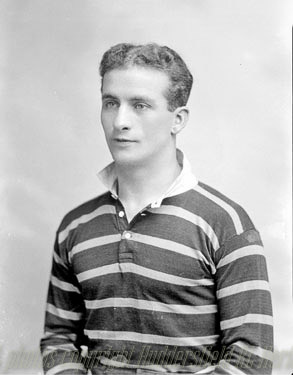 Born in Treherbert in 1892, William Gwyn Thomas was Wales' fifth captain, leading the side in the second of his two caps, in 1921 against England. An outstanding talent as a youth, he was playing for Pontypridd Schools at aged 12 and was captain at 14. He made his full Pontypridd debut in the 1908-09 season aged just 16. He played three games in the 1912–13 season before joining London Welsh for the remainder of that campaign. He then turned professional with Wigan for the start of the 1913-14 season, winning his first Welsh cap in February 1914 then touring Australia with the 1914 Lions playing in one test. After moving to Huddersfield, he won eight more GB caps, five of which were on tour in Australia and New Zealand with the 1920 Lions. He later played in the infamous "Welsh game that never was". Moving to the USA later in life, he died in Indian River, Florida on January 11 1984 aged 91.

N.B. It has been claimed that he may have played for the Barbarians against South Africa Services in 1915. However the Barbarians website say this was a different Gwyn Thomas.