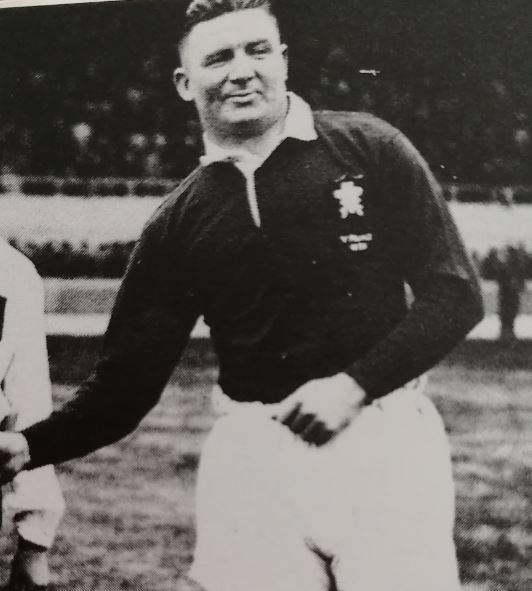 Wales' eighth captain, Jim Sullivan was born in Elaine Street, Splott, His father was a butcher from Ireland. He went to St Alban’s School and played rugby union for St Peters in Cardiff (a future rugby league ground in the capital) guesting once for London Irish at Abertillery before joining Cardiff at 16. At Christmas 1920, he played against the Barbarians for Cardiff, then for them the next day against Newport. He played in a Welsh RU Trial and just missed out on selection for the national side at 17. He also excelled in British baseball and was a Wales international at aged 17.

He went north to join Wigan and his debut came against Widnes in August 1921. By the time he hung up his boots in February 1946, he had made 774 Wigan appearances and amassed 4,883 points which included 2,317 goals - all remain as club records. Included in this tally are 22 goals in one game, which was against amateurs Flimby & Fothergill in the 1924-25 Challenge Cup. This still remains a Cup and club record for goals in a game. He won four Rugby League Championship finals, the Challenge Cup twice and the Lancashire Cup three times. He was a one-club man during peace-time and only played for other clubs during World War II, leading Dewsbury to the 1041 Challenge Cup Final, which they lost to Bradford Northern.

He won the first of his 26 Wales rugby league caps (a record for over 70 years - he's now in fourth place in regards to Wales caps) eight days after his 18th birthday. His final appearance came at aged 36 and he led his country as captain 18 times - a Welsh record. His 60 goals in his capped internationals (plus a further three in a non-capped game) for Wales is also still a Welsh record.

In addition to his 26 Wales caps, he played 25 Tests for Great Britain, three for England and six for Other Nationalities. His total of 60 full international caps is a British record and the second most from anyone in the world ever (after Australia's Darren Lockyer). He scored 329 test points in total. He toured with the Great Britain Lions three times (1924, 1928 and 1932) and was captain on the last occasion. He top-scored on all three tours amassing 424 points in the non-test games alone.

In his first class career for club country and recognised invitational sides, he scored 6,022 points (second in the world, after Neil Fox who scored 6,220) which included a world record 2,867 goals. He played 928 first-class games for club, country and other representative sides, which is a world record for professional rugby league career appearances.

By 1932, he was Wigan's player-coach and he continued to coach them after retiring, guiding them to two Challenge Cup wins at Wembley, six successive Lancashire Cups and three Northern League Championship finals.  He switched to St Helens at the start of the 1952-53 season and immediately steered them to the League Championship title in 1953 and to their first Wembley triumph a year later. He is in the RFL, Wigan. St Helens and Welsh Sports Halls of Fame. He died in his home town of Cardiff on 1 November 1977 at the age of 73.