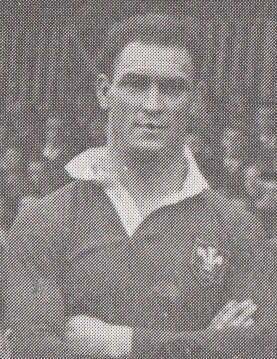 Douglas Versailles Phillips was Wales' 13th captain, leading us just once, which was in our 50th international in 1947 in France. He was also played for Great Britain and was a member of both the 1946 and 1950 touring teams to Australia and New Zealand being capped four times (three in 1946, one in 1950) against Australia. Doug was born in Neath on the day the Treaty of Versailles was signed and as a result was given the middle name of Versailles. As a schoolboy he played rugby union for Neath Schoolboys and was playing for Swansea RFC's first team when aged only 18. Two appearances for Glamorgan followed as well as two trials for the Welsh national side before the Second World War intervened and he joined the army. During the war Phillips played for the Combined Services XV and featured in a rugby union match at Odsal Stadium, Bradford in April 1944 against the Combined Services rugby league XV. Doug scored the opening try of the game although the league XV ran out 15–10 winners. However his performance in this game brought him to the attention of several rugby league clubs and he signed for Oldham towards the end of 1944. His army service prevented him from playing regularly and by the end of the 1945–46 season he had made only eight appearances for Oldham but had done enough to be called up to play both for Wales and Great Britain. Following his return from Australia and New Zealand, he played 10 more games for Oldham before being transferred to Belle Vue Rangers in January 1947 for a £1,000 transfer fee. At Rangers, he made 253 appearances scoring 28 tries. He retired from rugby league in April 1953 and returned to Neath. He died in his hometown on 28 April 2000, aged 80.