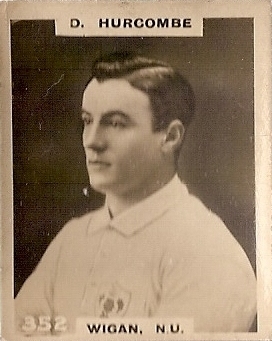 Danny Hurcombe was Wales' seventh captain, leading the side in the final three of his seven caps. Initially playing rugby union for Talywain RFC, he was brought north by Wigan in 1919 and became a half-back of very high regard, scoring 72 tries in his 199 appearances over seven years. After that, he had spells at Halifax, Leigh and Keighley. He won all bar one of his eight Great Britain caps on tour, going down under with the Lions in 1920 and 1924, also appearing in another 17 tour games against club and provincial sides in Australia and New Zealand. He also made two appearances for "Other Nationalities". He remained in the north after retiring in 1932, working as a colliery platelayer, and died in Wigan on 19 March 1965, aged 70. His nephew Andrew played for Halifax and York and also made an appearance for a Welsh XIII in a non-first class testimonial match.