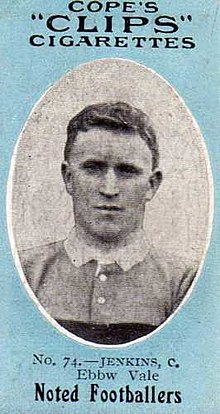 Known as Chick, but his given names were Thomas Henry, and not William as reported in some quarters. Born in early 1880 (exact date unconfirmed), he is officially Wales RL player number 1 as he played at full back in the first ever international match. Wales' third captain, he was a tourist with the first Lions to Australia and New Zealand in 1910 but didn't play in a test match despite scoring eight tries and kicking two goals in his eight tour games. He remains Wales' only Lions tourist whilst with a Welsh club. During his time with Ebbw Vale, he also played for the first ever Wales Clubs XIII side who took on and beat the first touring Australian Kangaroos side. He started off playing rugby union at Pontypool where he scored a then record 101 points in a season for the club before going north to Hull in 1902. A miner by trade, he retired from rugby after Ebbw Vale NU were wound up in 1912. He died in Bedwelty in 1932.