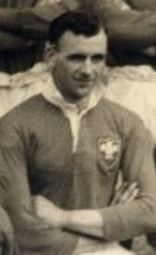 Douglas 'Ralph' Morgan became Wales' 16th captain on November 12 1949 when, deputising as skipper for the injured Trevor Foster at just 48 hours notice, he led us against France facing up against, and outkicking Puig Aubert. That was the second time that Morgan had faced the famous Frenchman, having played against Carcassonne for Swinton two years earlier. Known for his kicking abilities, he actually burst the old leather ball on his Swinton debut. After Swinton he crossed the Pennines for a season with Leeds before returning to Lancashire to finish his playing days with Belle Vue Rangers. He initially turned professional with Swinton during the 1946-47 season after a rugby union career that saw him earn international trials with Newport, his early days in the union code having been spent with Machen and Cross Keys. Whilst playing for Newport he had been watched by Leeds officials in a game against the Kiwis but the Yorkshire officials returned home and opted to sign New Zealander Bert Cook instead. Cook and Morgan had opposed each other in rugby union when Newport drew 3-3 with the magnificent New Zealand European Forces team on December 29, 1945. Also a brilliant British Baseball player, like Jim Sullivan before him and Dai Bishop after him, he won Welsh honours in 1946 in that sport. A policeman by trade, he died on May 13 2009 after a short illness aged 89.