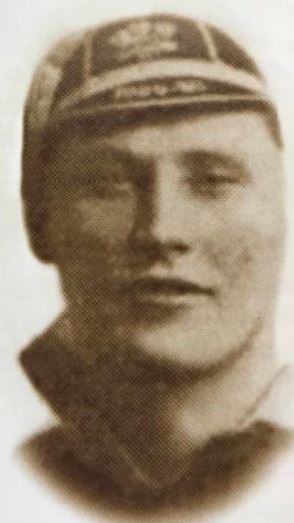 William Trevor Thomas, also known by the nickname of "Ocker" won one rugby union cap for Wales then three for Wales RL becoming a dual code international. Merthyr-born, Ocker's family moved to Oakdale where he went to school. A prodigious talent he moved from junior rugby in Oakdale to Abertillery, whilst also making appearances for Blackwood, where he was chosen to play flanker for Wales versus England in 1930. Overwhelmed by the occasion he was arrested for over-exuberance afterwards and was never selected again! Some say he was a 'big man with a squeaky voice' but no-one ever said that to him face-to-face! He was a miner in Oakdale before switching codes and turning professional with Oldham. He moved to Wigan in 1936, winning a Lancashire Cup winners medal in 1938, before returning to Oldham in 1940. He eventually returned to Wales, and died on 3 February 1969, aged 61, in Sofrydd, Crumlin, Wales.