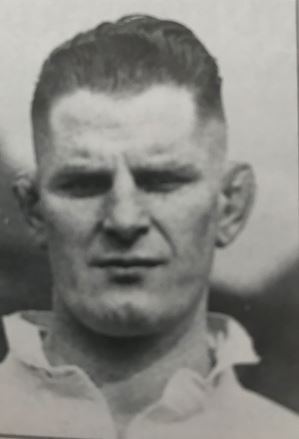 Harold Watkin Thomas won just the two rugby league caps for Wales to add to his six in rugby union, making him a dual code international. Starting off with local rugby union club Cimla, he eventually played for Briton Ferry and then Neath. It was while with the Welsh All Blacks that he won his Welsh RU caps, but played again for Wales RU in an unofficial victory internationals after his rugby league career had ended. He turned professional with Salford in 1937, not long after his final Wales RU cap and played for the club 119 times, despite war breaking out in 1939. He won a Challenge Cup with Salford at Wembley in 1938. A metal worker by trade, Harold served as a regimental sergeant major in the maritime branch of the Royal Artillery during the Second World War. He saw action in the Atlantic, Russian and Indian waters, and at one time survived the sinking of his ship by a Japanese submarine. He died in Neath on 10 December 1989, aged 75.