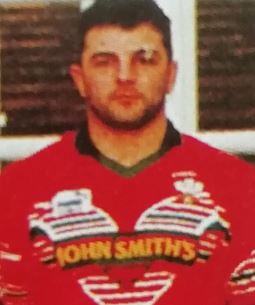 Rowland Phillips played in the 1995 Rugby League World Cup for Wales and was also part of the side who won the European Championship earlier that year. His 17 appearances for Wales were consecutive, from our men's side comeback game in 1991 against Papua New Guinea, until his final non-capped appearance against England A in 1998, by then credited then as an RU player with London Welsh. He also won one Great Britain cap during his time in rugby league. He started his rugby union career with his hometown club St Davids, before joining the side that used to be a force in South Wales, Neath RFC. While in his initial three-year spell there, he won 10 WRU caps before turning professional with Warrington, playing 50 times for them in four years and claiming a Regal Trophy winners medal. He spent a month's loan at Rochdale Hornets in 1992. He left the Wire to go further north to Workington Town where he became more of a regular and a fan favourite, clocking up 88 appearances and scoring 11 tries. A quarter of them were in the inaugural Super League in 1996 where he was an ever present. Returning in union, he joined London Welsh in 1997 before returning to Wales and Neath in 1998, eventually becoming their head coach and leading them to four successive Welsh Premiership titles and three WRU Cup Final wins. In the Summer of 2009 he joined Ebbw Vale RFC as head coach. After an unsuccessful season which saw Ebbw Vale relegated, he joined new Italian rugby team Aironi, originally as a defence coach, a position he previously filled with the Ospreys and Wales. He became Head Coach there in 2010 before moving to another Italian club Viadana in 2012. He returned to coach Neath for the 2014-15 season, before coaching London Welsh the season after. Following that, he started working for the WRU and became the Wales Women's head coach, departing in early 2020.