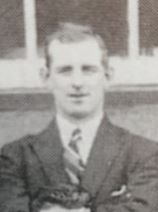 Dai Edwards played all three of his international rugby matches against England, one in the amateur rugby union code and two in that of professional rugby league. Dai's rugby career was interrupted by the outbreak of World War I, in which he fought for his country serving in the Welsh Guards. On the resumption of club rugby in 1919, he rejoined his local team Glynneath, and was given the captaincy in the 1919/1920 season. Then in 1921, he signed for Rochdale Hornets and played in their most memorable match ever - the 1922 Challenge Cup Final at Headingley in Leeds where they beat Hull 10-9. Returning to Wales in the late 1920s, he coached Rhigos RFC, until he was stopped by the Welsh Rugby Union due to his background as a professional league player. He was however allowed to play for Rhigos during the Second World War. A collier by trade, he died in Glynneath on 24 August 1960, aged 64.