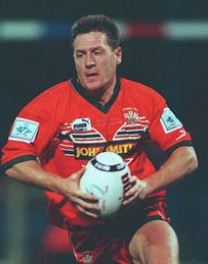 Allan Bateman had two spells with the Wales RL side. He won his first 12 caps whilst playing professional, the final of those in 1996 whilst at Cronulla Sharks where he made his own way back to Cardiff to play against England before turning out for the Sharks again a few days later. He won his last two caps in 2003 whilst playing at Bridgend Blue Bulls - a community team he helped to establish that year. He played in every game of Wales' 1995 European Championship winning and World Cup semi-final year, plus in the World Nines side in Fiji in 1996. Born in Caerau near Maesteg in the north of the Llynfi Valley, he was a precocious rugby talent playing for his Primary and Junior school team, Plasnewydd (coached by David Rogers), and the Maesteg Town team in the 1970s. As a centre for Neath, he gained four caps for Wales RU in 1990 before moving to rugby league with Warrington Wolves where he was a League Cup winner in 1991. He also won three Great Britain caps. He returned to rugby union after it went professional in 1996 to gain a further 31 Wales caps and one for the British and Irish Lions in 1997. During his short stint at Northampton Saints he was a key figure in their European Cup triumph in 2000. Following his retirement from professional rugby union, Allan continued to play community rugby league and union, eventually retiring at aged 45. His career after rugby was in medicine, working at places like the Princess of Wales Hospital in Bridgend and The NHS Trust.