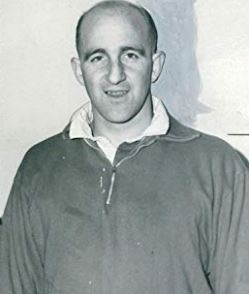 Benjamin Lewis Jones became Wales' 24th captain when he led us in France in 1963 in the second of his two Wales appearances that were 10 years apart, as we played few games in that era. In rugby league circles, Jones was more famous for being a Great Britain international, winning 15 full caps and scoring in every game he played, whilst also turning out twice for Other Nationalities. He also represented the Rest of the World in the 11–20 defeat by Australia at Sydney Cricket Ground on 29 June 1957 which followed the World Cup, for whom he represented Great Britain. He was also a Lions tourist in 1954 and set the record for most points in a test series in 1956–57, scoring 51 points in three games against France. Rugby league historian Robert Gate has described Lewis as "arguably the most devastating attacking back Wales has ever produced."

Lewis was educated at Gowerton Grammar School, and played club rugby for Neath before undertaking his national service in the Navy. After leaving the Navy he joined Llanelli. He won the first of his 10 Wales rugby union caps in a match against England in 1950. This was an encounter that he might easily have missed as he had been about to depart for Hong Kong on board an aircraft carrier until the orders were countermanded on discovering that he was a rugby player. That same year, he played for the British Lions, being flown out as a replacement for an injured player on the tour to New Zealand and Australia, and playing in three test matches. He scored 63 points in seven games in New Zealand and 16 points against Australia in Brisbane.

In November 1952, he signed for Leeds for a then record £6,000. A broken arm prevented him having much impact in his first season, but in 1953–54, he scored 302 points. In 1956–57 he scored a record 496 points, and was the first Leeds player to score over 1,000 goals for the club, a feat not matched until 2009 Kevin Sinfield. He help Leeds to win the Championship in 1961, Challenge Cup in 1957, Yorkshire League in 1954-55, 1956-57 and 1960-61, and Yorkshire Cup in 1958. He was awarded a testimonial match at Leeds in 1963. In a British playing career of more than 400 games, Lewis stood behind only Jim Sullivan and Gus Risman on the game's all-time points chart with 3,445, before going on to score more than 1,000 more for the Sydney-based Wentworthville in Australia, where he spent six years as a player-coach and a further two years as a non-playing coach. He returned to Leeds in 1972 to take up an appointment as a Maths Specialist at Silver Royd High School. He coached the Leeds ‘A’ side for a season before taking over first team duties briefly at Dewsbury during 1977-78. He retired in the area and In 2009, he was named in the all-time Yorkshire Rugby League Dream Team, whilst in 2013, he was inducted into the Rugby League Hall of Fame. He was inducted into the Leeds Hall of Fame in 2017.