Jonathan Griffiths - Half back 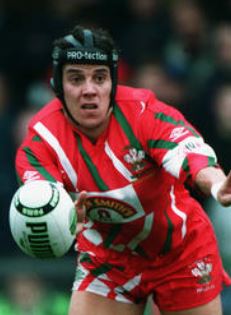 Jonathan Griffiths was selected for the Wales 1995 Rugby League World Cup squad. He also won one cap for Great Britain. He played for St Helens between 1989 and 1996, scoring 39 tries in 143 appearances, picking up winners medals in the Premiership and the Charity Shield. He came to Saints notice by playing well for Wales RU against the All Blacks in 1988, one of just two caps he won for Wales in rugby union as was largely kept out by Robert Jones. He was also selected for both Crawshays and Barbarians whilst in his initial six year spell with Llanelli RFC that saw him win a Welsh Cup winners medal in 1988. But this is all just part of Jonathan's amazing sporting story as he not only represented Wales in both rugby codes, but also played for the Wales Minor Counties cricket team. His original sport was football, playing for Newport Youth, but not in Wales, as he grew up on the Isle of Wight. He began to play rugby at Sandown High and was told by his teacher: “You’re a scrum half, son.” and then had little chance of staying with football. He then played for both Sandown and Shanklin Rugby Union Club and Shanklin Cricket Club. He moved back to Wales and while playing for Carmarthen Quins, he was capped for Wales Youth before being spotted by Llanelli. During that time, he was the club professional at Llanelli Cricket Club, who played in the South Wales First Division (this kind of thing didn't break rugby union's amateur regulations!) and then turned out for Wales in minor competitions. A fireman by trade, in 1996 after rugby union became openly professional, he moved back to Wales from St Helens to play another two seasons with Llanelli RFC, giving him a total of 178 appearances, 69 tries and three conversions. He continued as a fireman after that, whilst also playing for his hometown club, Haverfordwest.