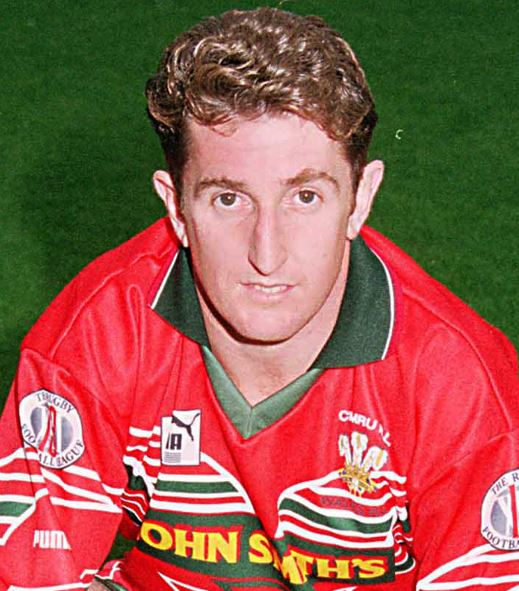 Jonathan Davies, known to many as "Jiffy" was one of just two players to captain Wales in every game he played for us, the first being our very first captain in Tom Llewellyn. As Wales' 33rd captain, he kicked goals in all of his appearances, leading us to European Championship glory and a World Cup semi-final in 1995. The defeat to England in that tournament was his last game of a six-year rugby league career as he became the first Welshman to return to union after it became open. He won 13 Great Britain caps, and will be rightly remembered for his final game in those colours which was in 1994 where he scored an outstanding try, as the Lions beat the touring Australian Kangaroos at Wembley Stadium.

He started his rugby union career with his local side Trimsaran RFC, for whom his father Len had also played for and captained, transferring to Neath 1982. He won the first of his 37 Welsh RU caps after just 35 games for Neath when he faced England at the Arms Park National Stadium, scoring a try and a drop goal and was named Man of the Match in the Welsh victory. He was eventually made captain of Neath before moving to Llanelli for 1988-89. However that season, he was widely blamed for Wales' defeat at home to Romania and it wasn't long after that, he was recruited by Widnes by former Wales international Jim Mills, who had reportedly been bought a drink while in the town by a Llanelli director not realising that his star player had just been poached for a then record fee of £230,000.

Jonathan joined a Widnes side who were league champions and he picked up two winners medals in his first season which was 1989-90 - the World Club Challenge and the Premiership Final. Immediately he was selected for Great Britain and made his debut on the Lions tour to Papua New Guinea and New Zealand. Charity Shield and Lancashire Cup winners medals followed the season after before he spent a 14-game loan spell with Canterbury Bulldogs where he scored seven tries and kicked 19 goals as he helped them to the first round of the play-offs. Returning to Widnes, he picked up a Regal Trophy winners medal, but his club were now facing financial difficulties and they were forced to off-load Jonathan to local rivals Warrington. His final points tally with Widnes read 78 tries, 224 goals and four drop-goals in his 126 games, equalling 1,180 points. After two seasons with Warrington, where his points tally in just 66 games was even more impressive - 43 tries, 232 goals and 26 drop-goals, equalling 662 points - he again went to Australia, playing in North Queensland Cowboys' first ever season, alongside future Wales captain Damian Gibson. On return, he played seven more matches for Warrington before joining Cardiff RFC in November 1995. A year later was awarded an MBE and he finally retired from rugby in 1997.

Since then, Jonathan has worked in the media as a commentator and pundit in both rugby codes, primarily for the BBC in both the English and Welsh languages. Since 2004, he has hosted his own chatshow "Jonathan" on S4C, usually before Welsh RU international matches. Think a Welsh language rugby union version of "The Footy Show" (when it was good) and you'll be almost there. His regular guests included his former WRL team-mate Rowland Phillips, dual code rugby presenter Sara Elgin and rugby union referee Nigel Owens. He was President of Celtic Crusaders RLFC from 2006 until 2009 and had a big input into their TV coverage and Super League application. He is a supporter of the Wooden Spoon charity and in 2015, Jonathan was awarded the OBE for his charitable services to people with cancer having more than £10 million for Cardiff's Velindre Cancer Centre where he is President.