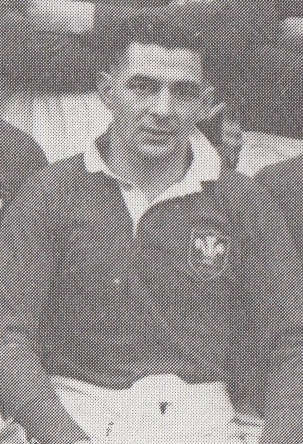 Dai Jenkins was Wales' 15th captain, leading us just the once, in his final appearance for Wales. A member of our European Championship winning side in 1938, he also won one cap for Great Britain, at home to New Zealand in 1947 and was a Lions tourist to Australia and New Zealand in 1946 on the Indomitables tour, but didn't play in any of the tests. Not the son of David Jenkins (Snr) as often reported, his father, Richard played Rugby League for Hull before returning to Wales. Dai started playing rugby union at Penyrenglyn School in Treherbert and in 1927/28 was vice-captain and scrum half when his team won the Welsh Schools Championship. He was a schoolboy international in 1928 and eventually signed for Cardiff RFC. From there, he turned professional and went to London, played one season for Acton & Willesden and half a season for Streatham & Mitcham. He, along with Con Murphy, were transferred to Leeds for a joint transfer fee of £600 in December 1936. He then spent over 12 years at Headingley, playing 292 times, scoring 55 tries and kicking seven goals, but also spent a short period of time with Hunslet as a guest player on their tour to France in 1938. He helped Leeds to Challenge Cup Final wins in 1941 and 1942. Also during the war, he represented Yorkshire, and a Rugby League XIII against Northern Command. He was given the Leeds captaincy in 1948-49 and shared a testimonial match with Dai Prosser at Leeds that same season. Dai left Leeds to join Keighley in 1949 and played for them until 1951. The last move of his playing career was to Bramley where he was player-coach, and then coach between 1951 and 1957. After rugby, he became a publican and died in Leeds in 1979 aged 65.