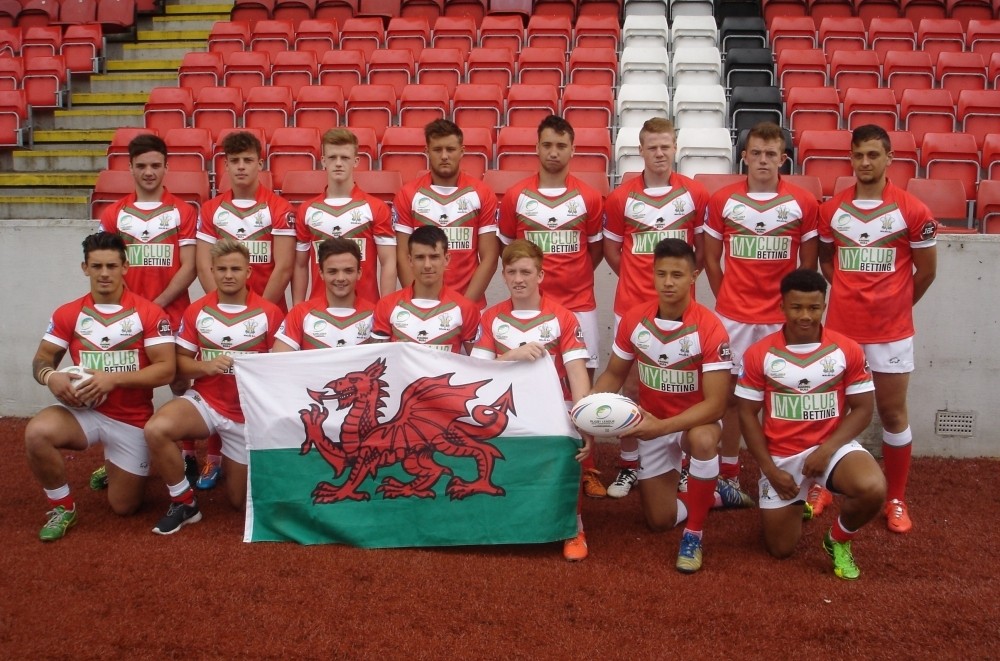 Wales have qualified for the semi-finals of the Rugby League Commonwealth Championship after wins over Scotland and Jamaica on Friday.

In the nine-a-side tournament at Glasgow’s Broadwood Stadium, home of Clyde FC, Wales put on two excellent performances for their wins and a creditable performance in their defeat against favourites Australia.

Finishing second in their group, Wales will now take on Papua New Guinea at 3pm in tomorrow’s big match, updates of which can be heard on The Season Ticket on GTFM 107.9.

Australia take on Canada in the second semi-final at 3.30pm.

Hosts Scotland and second favourites England both crashed out of the competition in Friday’s group stages and they will avoid each other in the first consolation semi-final tomorrow. England take on Jamaica at 2pm before Scotland face South Africa at 2.30pm.

Ranking matches start at 4pm with the Final at 5.30pm.

Wales coach Jon Ellis said: “The lads did well today and listened to what the coaches had to say and executed it well. We ran Australia well in the first half of that game and genuinely thought we’d win. It was their sheer physicality that overcame us in the end. I’m really proud of the lads and we’re looking forward to tomorrow now. We’ll play who are in front of us. Papua New Guinea are flesh and blood like us and we’ll give 100% and hopefully get to the Final. We are a little surprised England didn’t qualify but it just shows how much skill there is all around the world when it comes to Rugby League.”

Wales came back from behind to beat Scotland in their first game of the Rugby League Commonwealth Championship.

They could have taken an early lead when Curtis Davies kicked for James Taylor but the ball just went over the dead-ball line before he grounded.

From a penalty, Jack Stewart ran in to give Scotland the lead which was converted well by Alex Jobson.

Nippy winger Taylor, who recently joined Scorpions after leaving the Ospreys, got a try back for Wales in the corner with Curtis Davies failing to convert and the same player, in the same place, then gave Wales the lead. This time it was Ben Jones who missed the kick and Wales went in at half-time 8-6 up.

Scotland looked to get an early second half try back. Lewis Clarke was held up over the line but from the next play, Wales intercepted a grubber and went on the charge.

From that set, Harry Cartwright strolled over for Wales’ third try. Ben Jones converted to give Wales a 14-6 lead.

Full-back Jones added Wales fourth try with an excellent line-break from 60 metres. He failed to add the extras and just before the final hooter blew.

It was a great effort from Wales against Australia in their second game of the Commonwealth Championship but the favourites eventually won through 34-10 thanks to four tries from Joseph Manu.

Wales’ side came entirely from South Wales Scorpions while Australia were represented by solely players from the Sydney Roosters side that won the Australian under 18 title last year so it would have been the shock of the tournament had Wales won.

It’s Canada who currently hold that mantle after beating England 24-4 in their opening game.

Wales took the lead with a try from former Osprey James Taylor in the corner. Ben Jones misses the kick.

But a mistake put Australia straight back in with Manu running in his first and Chad O’Donnell converting.

Wales struck back straight away when Harry Cartwright scored under the sticks and Jones converted.

And tit for tat, Manu ran through a gap to grab his second from kick-off with O’Donnell converting to give the favourites a 12-10 half-time lead.

He completed his hat-trick early in the second half converting himself to make it 18-10 before running in for his and Australia’s fourth, under the sticks like the last one, again converting to give the favourites a commanding 24-10 advantage.

NRL fitness showed in the end. Further tries came from Luke Chevez Ellis and O’Donnell, the first converted by O’Donnell to secure the victory.

Former Ospreys academy player James Taylor was again the star for Wales in their third game as they qualified for the semi-finals of the Rugby League Commonwealth Championship in Glasgow.

James Taylor ran in for the first try of the game, his fourth of the tournament, that Ben Jones converted.

Alex King’s grubber was picked by Taylor who nabbed his second which Jones goaled again, this one in off the post to make it 12-0 at half-time.

Wales continued to turn on the style after half-time. Paul Edwards charged through for Wales’ third. This time Jones failed to add the extras.

Ben Jones cantered under the sticks for the fourth try then Rhys Davies added the fifth. Jones easily converted both to make the score 28-0.

Finally a 70-metre run from Marcus Webb rubbed salt into the wounds of the tiring Jamaicans. Jones goaled again to make the final score 34-0.