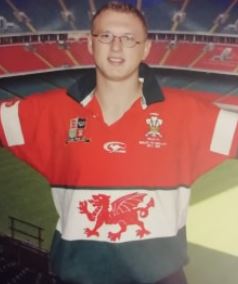 Jon Breakingbury came through the junior ranks at Abercynon RFC and in 1999, started playing Academy Rugby League at Cardiff Demons. In 2001, he was in their first team, and represented both Wales Dragonhearts and Wales Students. He was also selected for Great Britain Students. All of this brought him to the attention of professional clubs and he had trials with Widnes, Wigan and St Helens before signing for Sheffield Eagles on a three year contract. Despite playing well at the Eagles, making 45 appearances and scoring 15 tries between 2002-2005, he wasn't selected by Wales (although he was in the squad in 2002) until he returned home. He joined Valley Cougars in spring 2005 and eventually won his full Welsh cap later that year. He joined Celtic Crusaders and played in their first match, a friendly against Harlequins, but didn't get taken on by John Dixon. Continuing with the Cougars, he won further Dragonhearts caps before eventually moving to Gateshead and playing both rugby union and league there, the latter for Winlaton Warriors and Gateshead Spartans.