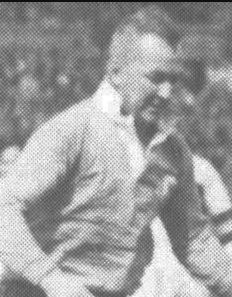 Cornelius Denis Murphy played three times for Wales in rugby union and a further 11 times in rugby league where he was a member of the 1936 and 1938 European Championship winning sides. Originally a miner, he played for Ynysddu and then Cross Keys, which is when he won his rugby union caps in 1935 then went on the annual Crawshays tour. Later that year, he turned professional with Acton & Willesden, one of the two newly-formed pioneering clubs in London. After one season, Acton & Willesden because of lack of support and he was transferred to neighbouring Streatham & Mitcham for the start of the 1936-37 campaign, only for them to last just a few months. In January 1937, he was picked up by Leeds, where he spent 10 years. During that time, he won a Yorkshire Cup winners medal in 1937 and successive Challenge Cup winners medals, in 1941 and 1942. After retiring, he became in publican in Leeds, running the Nag’s Head and the the Lloyds Arms. He died in Leeds on 13 July 1964, aged 55. Con's son and grandson went onto play rugby union for Headingley RU and Yorkshire County.