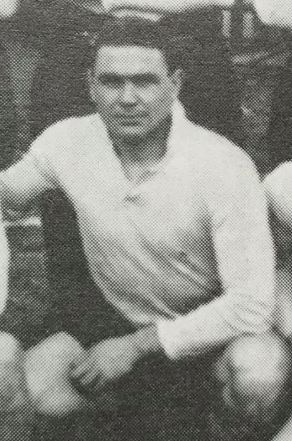 David Morgan Jenkins played four times each for the Wales rugby union and rugby league sides. He also made one appearance for Great Britain and also turned out for in Glamorgan in their 18-14 victory over Monmouthshire in the non-County Championship match in 1927 at Taff Vale Park, Pontypridd. David first played rugby union as a school boy, representing Bryndu School in Kenfig Hill. A keen sportsman as a youth, he also enjoyed association football, and had trials with Swansea Town AFC. After leaving school he joined local club Kenfig Hill, but by the time he was selected to represent Wales in 1926, he had switched to Rhondda team, Treorchy. In August 1926 he switched codes, becoming a professional rugby league footballer with Hunslet. In 1931 he switched from Hunslet to Leeds, then in 1934 he moved clubs again, switching from Leeds to Dewsbury. He moved back to Wales after finishing his rugby career, dying in Bridgend on 22 April 1968, aged 66.