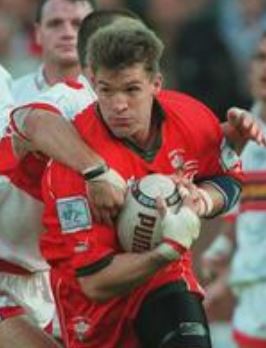 John Anthony Devereux played for Wales in both the 1995 and 2000 World Cups, plus played for Great Britain on eight occasions, one of which was in the 1992 World Cup Final after going on tour with the Lions to Australia earlier that year.. He'd previously played 21 times for the Welsh RU side, making his debut aged 19 against England at Twickenham and playing in the inaugural Rugby Union World Cup in 1987, as well as winning one British and Irish Lions cap. He started playing at his local rugby union club, Bridgend RFC, before turning professional with Widnes in 1989. With the Chemics, he won Lancashire Cup and Regal Trophy winners medals. He played 103 times for Widnes, scoring 32 tries, also enjoying a loan spell at Manly Sea Eagles in 1993 where he scored three times in 15 appearances. After rugby union became openly professional, he transferred to Sale Sharks in 1997, before slowly making his way back down to South Wales via Worcester from 1999-02, ending up back at Bridgend and playing both codes, turning out for the union club plus becoming a founder member of Bridgend Blue Bulls RLFC and helping them win the Welsh and National Rugby League Conference titles in 2003, their inaugural season. He continued to play union for Pontypool and Maesteg before retiring in 2006 aged 40. He continued his involvement in rugby league, becoming team manager of the Wales side for the Four Nations in 2011, whilst also sitting on the board of South Wales Scorpions in their first four years. After rugby, he worked in Demolition and Waste Management before becoming an Integrated Healthcare Manager.