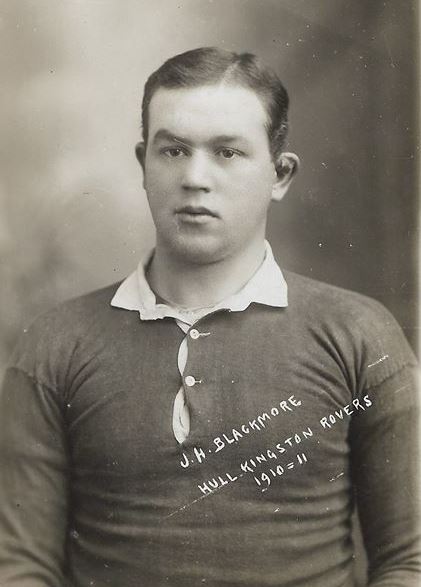 Joseph Henry "Jake" Blackmore won a single cap for Wales under the rugby union code and then represented his country professionally in Northern Union in two matches. Despite winning only one amateur cap, he became a Triple Crown winning player when he played in the opening game of the 1909 Home Nations Championship. Jake first came to note as a rugby player when he joined Abertillery in 1902, staying there for the majority of his amateur career, spending just two seasons outside the team when he left after a disagreement with the club. During these two seasons he represented first Tredegar, and then Blaina. In 1906 he was chosen to represent Monmouthshire county, and was part of the team that faced the South African national team on their first overseas tour. In 1910, he turned professional and joined Hull Kingston Rovers. The Great War put a stop to his rugby career and he eventually returned to South Wales, dying on 26 March 1964 in Aberbeeg.