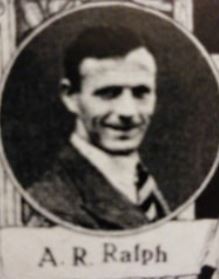 Albert Raymond Ralph won six caps for Wales in rugby union then another in rugby league, adding him to the already long list of dual code Welsh rugby internationals. Early in life, he won county honours at schoolboy level in both rugby union and cricket for Monmouthshire. Initially playing rugby union for his local side, Abercarn, he soon moved to Caerleon before playing for London Welsh when briefly based in England at university. When qualifying as a school teacher, he moved back to Wales, playing for Newport RFC and was capped for Wales, scoring two tries on his debut. He turned professional with Leeds in August 1933 and helped them win the Yorkshire League in his first season, an honour he'd repeat twice more. A Yorkshire Cup winner in 1934-35, he'd help his side to a cup double in 1936 when they beat Warrington 18-2 in the Challenge Cup Final at Wembley, to go alongside their retainment of the Yorkshire Cup. He left Headingley at the end of 1938 and played the remainder of the season with Hunslet, finally retiring at the end of the 1938-39 season. When war broke out, he continued teaching, moving from Hunslet Moor School to Thorp Arch Grange Approved School, where he was to serve for 23 years as teacher, then a further four as Headmaster, prior to his retirement in 1968. He died on 5 October 1989, aged 81, in Leamington Spa.