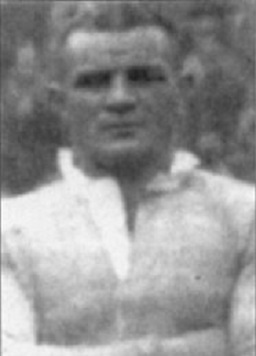 David Rees Prosser won two caps for Wales in rugby union, then a further eight in rugby league where he was a part of the 1937 and 1938 European Championship winning sides. He also won a cap for Great Britain in 1937 against Australia at Fartown Ground, Huddersfield. Starting in rugby union, Dai played in the same Neath & District Schools’ team as another Leeds favourite, halfback Cliff Evans. He eventually joined Swansea, winning a Glamorgan County cap in 1931, before returning to his roots, to line up in Neath colours with his brother Glyn, and was selected for the joint Aberavon-Neath XV to face the 1932 Springboks. He won his Welsh rugby union caps in 1934, went on the Crawshays' traditional Easter tour, and later that year turned professional with York. There, he led his side to the Yorkshire Cup in 1936, and was promptly bought by Leeds later that year, helping them to win that same trophy in 1937. He remained at Headingley for 14 years, even during war-time where he served as a Bombardier in the British Army and represented the Northern Command XIII in a 1942 representative match against The Rugby League XIII. During Dai's time at Leeds, they appeared in four Challenge Cup Finals winning two (1941 and 1942) and losing two (1943 and 1947). He appeared in three of these Challenge Cup Finals, and was on the winning side twice. He ended up with 327 Leeds appearances, 96 of them during war-time, which was said to have been a tremendous boost for players, management and spectators alike. He also figured in the ‘pride and prejudice’ match staged at Headingley between a Rugby League XV and a Rugby Union XV, drawn from Northern Command. He was given a joint-benefit with Dai Jenkins in April 1949, but still played on for one more season. Based in York, where he had a fish and chip shop, Dai took over as trainer-coach at his original club in the mid 1950s before returning to Leeds as assistant coach in 1960-61 as the Lioners won the League Championship for the first time. He died in York on 6 May 1973, aged 60.