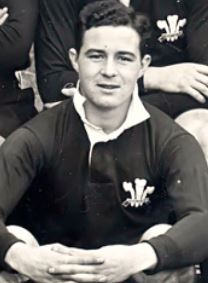 William Thomas Harcourt Davies won six caps for the Wales rugby union team and then a further nine caps for Wales in rugby league. He was also a 1946 Great Britain tourist to Australia and New Zealand, one of 11 Welshmen who went on the tour. The team became known by the nickname The Indomitables due to their travelling to Australia on-board the aircraft carrier HMS Indomitable. The tour was the first major sporting series played abroad by a British side in any sport after the Second World War. He played in 14 games on the tour, including the test against New Zealand. He scored five tries in the tour games. Willie first played rugby for Wales Secondary Schools, alongside his cousin and future Wales RU captain, Haydn Tanner. He played for this local side in Penclawdd before progressing to London Welsh, Headingley and Swansea. In 1935, he toured with Crawshays for the first time and also played for Swansea against the touring New Zealand team where the All Whites were victorious over the All Blacks. It was at Swansea when he was first selected to represent Wales at rugby union. His last match was in the 1939 Home Nations Championship, where he scored all seven points with a try and a drop goal for Wales. His drop goal was the last to be worth four points at international level. Just before World War II broke out, Willie turned professional with Bradford Northern, playing there for 11 years. Frank Whitcombe, Willie's Welsh team mate and fellow Lance Todd Trophy winner took on the role of 'minder' for Willie when he was targeted by opposing teams. During the war, he served in the RAF. Honours came after the war - he was man of the match, winning the Lance Todd Trophy, in Bradford Northern's 8-4 victory over Leeds in the 1947 Challenge Cup Final. He also played in the 12-0 Final victory over Halifax two years' later. He qualified as a games and geography teacher at Carnegie College of Physical Education, Leeds and then taught at Bingley Grammar School. He spent most of his teaching career at Weston-super-Mare Boys' Grammar School. He died in Rustington, West Sussex on 26 September 2002, aged 86.