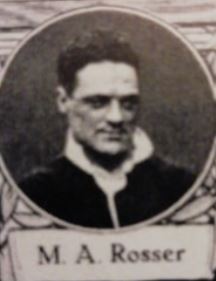 Melville Aaron Rosser played five times for Wales in rugby league between 1926 and 1933. He also toured Australia and New Zealand with the Great Britain Lions in 1928 where he was one of six Welsh players who went on the tour - he played in nine matches but wasn't selected for any of the six Tests. He was a dual code international thanks to his two caps whilst playing rugby union. He began his rugby career with his local rugby club Machen RFC, before moving to Cardiff RFC, played two seasons there before switching to local rivals Penarth in 1923. During his rugby union career, he also represented Glamorgan County and as a serving police officer, he also played for Glamorgan Police. At the start of the 1924/1925 season, he turned professional with Leeds. At the same time he left the police force and became a licensee. As well as representing Wales during his time at Leeds, he also played for Monmouthshire against Glamorgan at Taff Vale Park, Pontypridd in 1927. In the 1930/31 season, Mel switched rugby clubs from Leeds to Castleford for one match, and then to York, where he played in their Challenge Cup Final loss to Halifax in 1931. He remained in York after retiring and ran 'The Punch Bowl' pub for two decades. So well known by the locals that the pub was usually referred to as ‘Rosser’s’ rather than The Punch Bowl. His son-in-law took over the running of the pub after Mel retired. Mel died in York on 8 September 1988, aged 87.