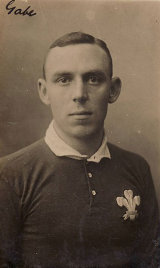 Iorwerth Isaacs won two caps for each of the Welsh international rugby sides, first for union in 1933 whilst with Cardiff, then later that year, he turned professional with Leeds and won the first of his two rugby league caps. He scored one try in the defeat against Australia that year, but was more successful in his second appearance in 1935 when he scored two tries in Wales' 41-7 win over France to help Wales lift the European Championship. Starting off as a junior with Cilfynydd, he soon moved down the road to Pontypridd before eventually moving to the Welsh capital to join the police force. Whilst with Leeds, he was part of the side that helped them with the 1936 Challenge Cup when they beat Warrington 18-2 at Wembley. Remaining in the north, he became a schoolteacher and then headmaster and was in that position in Wrexham when he suddenly died on 25 April 1966, aged just 54.