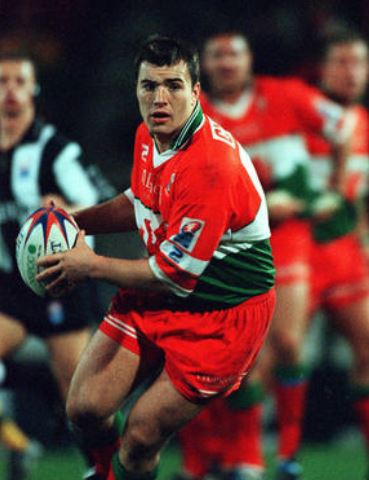 Just as the grandparent rule was being brought back into international rugby league, Iestyn Harris was making his professional debut. Lucky for us. He made his Wales debut against Australia in 1994 and played in every game in both the 1995 and 2000 World Cups for us, becoming Wales' 38th captain in 2000 and leading us in all six matches that year. He was also a part of the Wales side who won the 1995 European Championship. He became a dual code international a year later after a move to Cardiff RFC but was less successful in that code. Although he won 25 caps and played in the 2003 Rugby (union) World Cup, he only crossed the line once and kicked 41 goals. A total contrast to his international RL record where he scored 12 tries and kicked 58 goals and drop goal to become Wales men's record international points scorer with 161 - an accomplishment he still holds in 2021. In addition to his 19 capped games for Wales, he played 15 times for Great Britain and was a Lions tourist in 1996 and 1999.

Born in Oldham, his Abercarn-born grandfather Norman Harris was also a Wales RL international. Iestyn's professional career began with Warrington at age 17 in 1993 before a record-breaking £350,000 transfer to Leeds Rhinos in 1997. He was made captain of Leeds in his first full season at the club at the age of 21 and became the first Leeds captain in a decade to lift silverware when they claimed the 1999 Challenge Cup. In 1998, despite having played most of his games at fullback, he was named in the half backs in 1998's Super League Dream Team and also collected the Man of Steel trophy as the best player in the Super League. Iestyn broke the Leeds club record for goals in a season in 1999 with 168, he was named at stand-off in 1999's Super League IV Dream Team. He broke his personal 2,000 career points total two years later. Also in 1999, he matched the record for scoring the most points in a Challenge Cup Final when he scored 20 points (one try and eight conversions) in Leeds' 52-16 victory over London Broncos in the Challenge Cup Final.

So after an outstanding record in RL where he scored 516 points (37 tries, 182 goals, four drop goals) in 92 games for Warrrington, and 1,455 points (65 tries, 594 goals, seven drop goals) for Leeds, he switched codes and "went south" to rugby union, signing for Cardiff, making his international rugby union debut after playing only 200 minutes of his new code. He scored 403 points in 42 games for Cardiff before the regions were formed in 2003. For Cardiff Blues, his record was 82 points in 10 games before returning to rugby league with Bradford Bulls, helping them to Super League glory in 2005 before being appointed captain a year later, leading them to World Club Challenge victory. After 330 points (36 tries, 92 goals and two drop goals) for Bradford, he moved down a rank to Featherstone Rovers, spending a season with them as player-assistant coach and also worked in the marketing department. While there, he topped 2,500 rugby league career points.

Iestyn played for Wales again in the unsuccessful 2007 World Cup qualifiers and was appointed Wales assistant coach to John Dixon a year later. However John's dismissal by Celtic Crusaders in 2009 offered Iestyn two openings - the first was of Wales head coach where, with the help of assistants Kevin Ellis and Clive Griffiths, coached us to European Cup glory. The second was of assistant coach of the Crusaders, who were about to move north from Bridgend to Wrexham. The year 2010 was when it all went right for Iestyn and Welsh Rugby League. As assistant to Brian Noble, Crusaders reached the Super League play-offs, whilst as head coach of Wales, now assisted by Anthony Seibold, his side produced a shock win in France to retain the European Cup and qualify for the Four Nations. He took over as head coach of Crusaders in 2011 and had a far less successful year. The club finished bottom of Super League and went out of business, whilst Wales' friendly win over Ireland would be our last men's side victory under him - three winless tournaments meant parting company in 2014. By that time, he was head coach of Salford City Reds after spending two years as assistant coach at Wigan Warriors. He spent just a year in that role before turning to a more successful career in the media with the BBC, and in sports management.