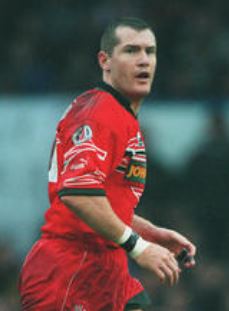 Adrian Hadley played for Wales in the 1995 Rugby League World Cup, just part of his 11 caps, one of which was against USA in 1995 where he scored a hat-trick of tries in our 92-4 record men's international win. A dual code international, he had previously won 27 Wales RU caps. Prolific for Cardiff RFC, he scored 118 tries and 197 appearances before turning professional with Salford. There he scored 260 points in 98 games over four years before switching to Widnes where he scored 310 points in 83 games. At the end of 1995, following financial issues at Widnes, he moved back to rugby union with Sale Sharks where he was player-coach, before being made director of rugby until he resigned in 2001 to become chief executive at Bridgend RFC. However when the regions were formed in 2003, Bridgend merged with Pontypridd to become Celtic Warriors and Adrian wasn't kept on for the new venture. So he switched professions and became director of fund-raising at St Anne's Hospice in South Wales, then deputy chief executive at St David’s Hospice Care in Newport. He kept his sporting interest up by serving as a director where is tall started at Cardiff RFC.