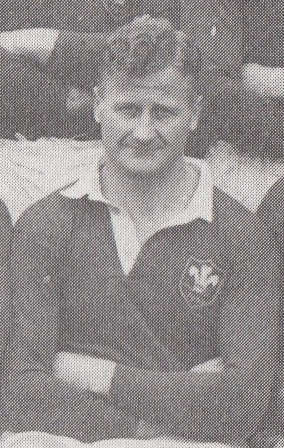 Arthur Bassett, the younger brother of another WRU international Jack Bassett, won six caps in rugby union before turning professional and winning a further three. He was also a 1946 Great Britain tourist to Australia and New Zealand, one of 11 Welshmen who went on the tour. The team became known by the nickname The Indomitables due to their travelling to Australia on-board the aircraft carrier HMS Indomitable. The tour was the first major sporting series played abroad by a British side in any sport after the Second World War. Arthur scored 18 tries in 11 games on that tour, the highest scoring Welshman. He played in the second and third tests against Australia, scoring a hat-trick of tries in the second and then two in the third, with the Lions winning both to claim The Ashes. Starting in rugby union locally with Pyle, he played for a few clubs out west before joining Cardiff. He also played for a year with Glamorgan Police due to his profession. With Cardiff, he excelled, scoring 99 times and 101 appearances and Welsh honours were a result, as was professionalism, as he signed for Halifax in 1939 playing there throughout the war. He finished his career with York, but his try scoring achievements with Halifax earned him a place in their Hall of Fame. He died in Matlock, Derbyshire on 30 December 1999, aged 85.