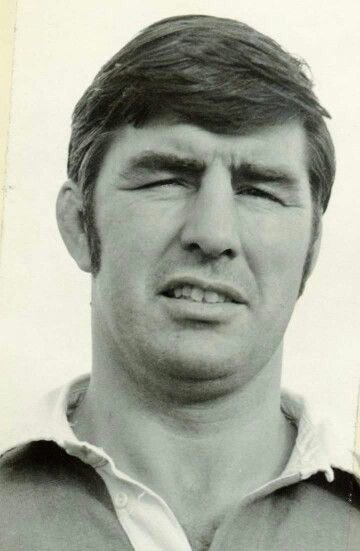 Douglas John Warlow became Wales' 26th captain when he led us in the second of his three caps, which was against France in 1969. In addition to his Welsh caps, he played six times for Great Britain between 1964 and 1971 also touring Australia and New Zealand with the team for the 1968 Rugby League World Cup. Born in Dafen and brought up in Burry Port in Llanelli, he played for local side Felinfoel before joining Llanelli in the 1957-58 season but just as he was establishing himself in the Scarlets team, his rugby career was interrupted by two years national service with Welch regiment. He returned to Stradey Park in 1960 where he established himself as a top class prop, 6ft 1ins tall and weighing in at 15 stones. He was selected by Wales for the game against Ireland in Dublin in November 1962, a Five Nations match that had been held over from the previous season due a smallpox outbreak in the Rhondda. This proved to be his only rugby union cap as after 71 appearances for Llanelli, where he scored two tries and kicked 20 conversions and eight penalties, he signed professional terms for St Helens on 23 October 1963. He was signed in a pub in Llanelli by secretary Basil Lowe and Saints Chairman Harry Cook as part of a bidding war with Workington Town. In St Helens, he lodged with a landlady called Minnie Cotton, who received national attention twice in 1966, when she invaded the pitch in both the Challenge Cup semi-final and the Championship Final that year, challenging the opposition with her umbrella as retribution for rough play against her lodger. Saints won the league and cup double that year. John had two spells at Knowsley Road, leaving the Club after the end of the 1968/69 season for a 133 game stint with local rivals Widnes, who he captained for three seasons, and returned to Saints in November 1973. His last match there was against Leeds in the 1975 Premiership Final, which they lost despite winning the league title (which was first past the post from that year until 1997). In 255 games at St Helens, he scored 27 tries. After 13 years in the North, which included a short spell at Rochdale Hornets, John returned to South Wales. He was involved in the coaching set up at Bridgend Blue Dragons in 1984-85 and was later the steward of the Burry Port British Legion. John is a member of the St Helens Hall of Fame.