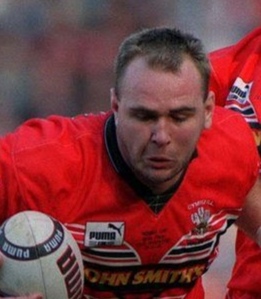 Leon Scott Quinnell is such a well-known name, it's hard to forget that he just spent two seasons in rugby league. Playing for Wigan between 1994 and 1996 he scored 22 tries in his 44 games at the club, helping them to two league titles, along with playing a part in their 1996 Regal Trophy triumph. Internationally, he played four times for Wales, helping us to the semi-finals of the 1995 Rugby League World Cup.

Scott was born into rugby union as the son of Derek Quinnell and Madora (nee John - the sister of Barry John), whilst his godfather was Mervyn Davies. Therefore, Scott started playing rugby for Llanelli Juniors at 8 years old and had his first game for the Llanelli Scarlets at 18. He went on to play 146 games for the Scarlets scoring 69 tries. When rugby union became openly professional, he moved to Richmond alongside his brother Craig, and WRL team-mate Allan Bateman. During that time, he was selected for the British Lions tour of South Africa, but injury meant he missed all the tests. He was more fortunate four years later on the Lions tour of Australia where he played in all three tests, and scored a try in the first test in Brisbane. Scott returned to the Scarlets in 1998, making another 59 appearances, before retiring in 2005. He played 52 times for the Wales RU side between 1993 and 2002, scoring 11 tries.

After retiring, Scott coached the Scarlets U21 and the Llanelli RFC squad. Following this, he starting working in the media, appearing on channels like Sky Sports on Real Radio. He is a patron of the Princes Trust, Make a Wish foundation and The Welsh Dyslexic Association.