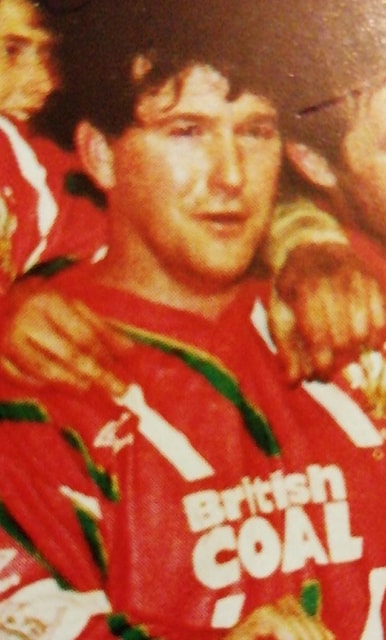 Gary Pearce became a dual code rugby international when he came on as a sub in our national side's comeback game in 1991, a 68-0 win over Papua New Guinea. Rugby league took up less than seven years of his life, but has spent over half of his life in Yorkshire. His rugby union playing career in Wales and Australia was successful, starting off in the youth at Laugharne and Carmarthen Athletic, and he went on to win three caps for Wales RU. He played for Bridgend and then at Llanelli, where he scored 1,157 points in 133 appearances including a record 422 points in  the 1985-86 season. He and Jonathan Griffiths scored all of Llanelli's points in their 1985 Cup Final win over Cardiff, so it's not surprising that both were soon to go to RL, Pearce to Hull FC in September 1986. After making 100 appearances, scoring 33 tries, 246 goals and 31 drop goals, he played four games on loan with Sheffield Eagles, before joining new side Scarborough Pirates as a founder player before the 1991-92 season. His one season there was successful as he was top goal and points scorer, including three goals in their first ever pro game - a 14-10 win away at Doncaster in the Yorkshire Cup. He joined Rydale-York for 1992-93 but by that time, he was already helping out at Pocklington RUFC. By the time he was an unused sub for Wales RL v New Zealand in Swansea in 1993, he was their player-coach, despite still being listed in the programme as a Rydale-York player! He spent eight years at the Pocks before moving to Hull RUFC as Director of Rugby, and then Hull Ionians as head coach, who he led to two successive promotions. He's now back at Hull RUFC as head coach, when in January 2021 he'll celebrate 20 years since first joining the club.