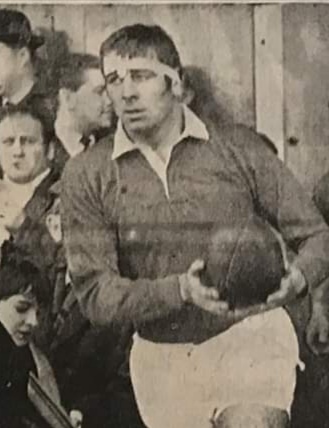 Born in Llanelli, Stuart Gallacher starting playing rugby union for Felinfoel RFC before joining Llanelli RFC in 1965, playing almost 200 games for the club. Whilst at Llanelli, he won his only international RU cap for Wales, against France on 4 April 1970. He also played for Barbarians. He turned professional with Bradford Northern in 1970 before moving to Keighley in January 1975, which is when he won all of his Wales RL caps, two in the 1975 World Cup where he was part of the last Wales rugby side to ever beat New Zealand. After retiring, he returned to Wales and eventually became involved in rugby union administration. He was appointed chief executive of Llanelli RFC in 1996, seeing them through to the regional era after they rebranded as Scarlets, before being appointed as chief executive of Regional Rugby Wales in 2009. He stood down from the post in June 2014 because of poor health. He was also a member of the board of the European Rugby Cup. He died on October 19 2014 aged 68.