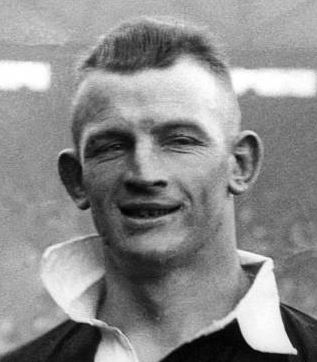 Emrys Evans played just once for Wales in rugby league, following his three Welsh rugby union caps, making him a dual code international. Playing locally at Cmwgors then Amman United, he eventually signed for Llanelli which is when he won his WRU caps. He turned professional with Salford in 1939 and scored two tries on his debut, but they were the only times he got over the line, leaving the club to joined the Army full-time for World War II. During the conflick, he played in two service internationals. After the war, he rejoined Salford briefly before moving to Wigan, playing there just eight times before injury forced him into retirement aged 35. Employed in the haulage industry, Emrys moved back down south and died in Bristol on 23 June 1983, aged 72.