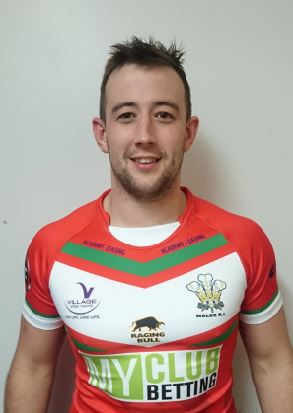 Izaak Duffy won his two full caps for Wales men following his first season of first class rugby league, when he played for Gloucestershire All Golds. He was at that club for two seasons, playing 31 times. He followed that up with a season and a bit at South Wales Scorpions where he turned out 22 times. He scored two tries for each club. Izaak through the Wales Rugby League student ranks playing for UWIC (now Cardiff Metropolitan University), South Wales Hornets and Cardiff Demons before being signed by All Golds in 2014. He also played for Wales Students in the 2013 Student World Cup, and Wales Dragonhearts, also in 2013. He later played rugby union for Cross Keys and Newbridge but retired when covid started. Since then, he's taken up bike racing since and won a criterium at Pembrey in 2022 and went into training for Ironmen competitions. Out of sport, he works for National Grid as a planning and design engineer.