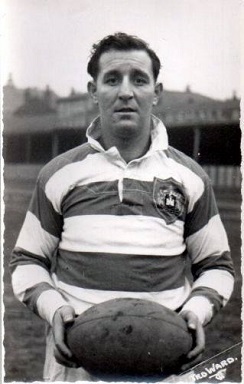 Edward Harold Ward was Wales' 14th captain, leading us nine times, the first being in September 1947 against England. He also won three caps for Great Britain, all on the "Indomitables" tour of 1946, plus made one rep appearance each for the British Army (v France in 1945) and the British Empire (v New Zealand in 1952). After his playing career, he coached Wigan and was the man responsible for giving Billy Boston his professional debut. He started playing for his local rugby union side Amman United as a teenager, before moving to Llanelli. From there, he turned professional with Wigan where he spent most of his professional career, scoring 55 tries and kicking 459 goals, which equalled 1,083 points scored in 204 appearances over 12 years, which included playing time during World War II. He helped Wigan to a Challenge Cup Final victory in 1948, where he kicked a goal in their 8-3 over Bradford Northern. He also won three Lancashire Cup winners medals with Wigan before moving to Oldham for the 1950-51 season where he made just nine appearances. He returned to South Wales for the 1951-52 where he played 20 times for Cardiff in their lone season in the professional game in that era, before returning north to take up the head coach role at Wigan. He also registered as a player there and made nine more appearances, scoring two more tries and kicking 21 goals. He quit as coach on Tuesday 24 July 1956 and eventually returned to South Wales. He died in Carmarthen in the spring of 1988 aged 70.