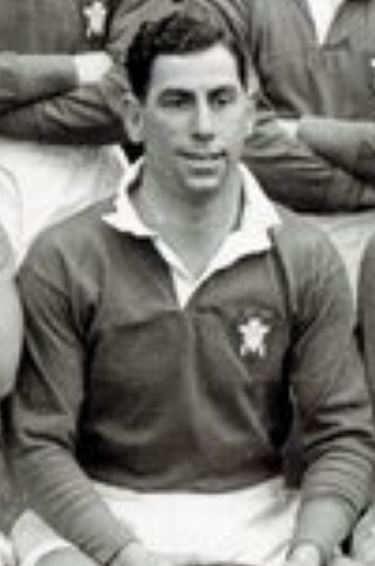 Trevor Foster was Wales' 12th captain, leading us seven times in his 16 appearances, the first being a war-time international against England in January 1943. He also won three caps for Great Britain, one being against New Zealand on the 1946 "Indomitables" Lions tour down under. A true gentleman, on and off the field, he was known for his sportsmanship and fair play, never once being cautioned or sent off in his 17-year career.

He started off playing rugby union at his local club Pill Harriers before joining Newport. There he played 35 games, before turning professional in 1938 with Bradford Northern (now known as Bradford Bulls) for the sum of £400. World War II more than slightly held up his career but he did continue playing for the club where possible, whilst also being a Sergeant Physical Training Instructor in the British Army where he played for their rep side, whilst also captaining the Northern Command XIII against a Rugby League XIII in 1942. He went on to become the key forward of an outstanding Bradford side in the post-war period, turning out 428 times for the club and scoring 140 tries, including 24 in the 1947-48 season and six in one game (it could have been seven but the ball was knocked from his hands as he crossed the line). He played in all three of Bradford's Challenge Cup Final wins in that period - 1944, 1947 and 1949 - and he scored a try in each of the latter two, which were at Wembley Stadium.

After his retirement from playing in 1955, Trevor remained a servant of the Bradford club successively as head coach, director, and then chairman of the Supporters Club, and then timekeeper for Super League home games. However it was in 1963 when he secured his place in Bradford and Rugby League history when he was the central figure in a campaign to save his beloved Bradford Northern club who had disbanded due to financial problems. He led efforts to reconstitute the club which was then able to rejoin the league the following season. In 2001 he was awarded an MBE, then in 2004 was inducted into Welsh Sports Hall of Fame, sitting next to the writer of this article, Ian Golden, at the celebratory dinner. He died on 2 April 2005, aged 90 in his adopted home of Bradford. His death came just three days after he launched his own biography, which celebrated an unbroken association of 67 years with the Bradford club.

After his death, he Trevor was included in Bradford's "Millennium Masters" and "Bull Masters" and in August 2007 he was named in their "Team Of The Century". In August 2009, he was name in the "Arriva Yorkshire Rugby League Dream Team" alongside Leeds' Lewis Jones (who was starting his career as Trevor was finishing).