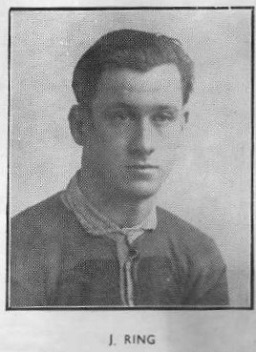 Johnny Ring will go down in history as one of Wigan's greatest players, scoring 368 tries in 331 appearances, holding the club's try scoring record until Billy Boston came along. He also set Wigan's club record for most tries in a season with 62 scored during the 1925–26 season. A dual code international, he played once for Wales in the union game and seven after turning professional in rugby league. He also won rugby league international caps for Great Britain and Other Nationalities. Starting his rugby union with Aberavon Quins, he later played for Aberavon RFC, the primary club in Port Talbot. He was picked up by Wigan in 1922 for £800 and in his nine years with the club, he picked up a number of trophies. He scored a hat-trick of tries in the 1926 Championship Final as Wigan beat Warrington 22-10 and created history in 1929 when he was one of five Welshmen in the Wigan side when they won the Challenge Cup Final when it was played for the first time at the old Wembley Stadium. He also picked up a number of Lancashire Cup winners medal, scoring a try in the 1922 final win over Leigh, then played in the victory over Widnes six years' later. He was transferred to Rochdale Hornets for £100 in 1932 after being refused a benefit match. He played two seasons there, scoring 12 tries in 26 appearances. After retirement, he qualified as a physiotherapist and spent the rest of his days in Wigan, dying in the town on 10 November 1984, just three days short of his 84th birthday.