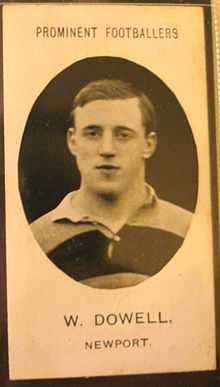 Billy Dowell played just once for Wales in the Northern Union game, but his seven amateur rugby union international caps meant that we was the just third player to have won caps for Wales in both codes. Pontypool born, he eventually played for his home club just before turning professional, but he primarily played for his Newport, first turning out for them in 1905, and was part of their team that faced two touring sides - the 1905 original All Blacks, and the 1906 South Africans. He was also part of the Wales Triple Crown winning team when he played in all three games of the 1908 Championship. A miner by trade, he returned to South Wales after his spell with Warrington. He died in Newport on 9 November 1949, aged 64.