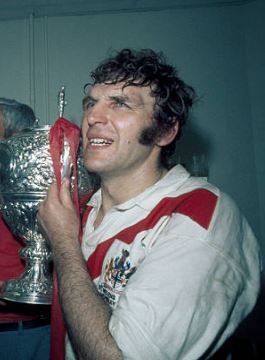 Thomas Kevin "Kel" Coslett is one of the few players to have both captained and coached Wales. He became our 29th first class men's captain after leading the side against Auckland on tour in 1975 when Dai Watkins was being rested. Playing for Llanelli and Aberavon in his rugby union career, he won three WRU caps, all in the 1962 Five Nations, before turning professional with St Helens. At Saints, he ended up kicking 1,639 goals in 531 games for the club. It's a mystery why we was never selected for Great Britain especially after his role in the 1975 "Battle of Brisbane" victory over England. Whilst at Saints, he won four League Championship medals, four Lancashire Cup medals, two in the BBC2 Floodlit Trophy and three in the Challenge Cup including a man of the match performance in 1972 giving him the Lance Todd Trophy. After retiring, he went on to coach Wigan, Rochdale Hornets and St. Helens, remaining with the latter for many years even after he departed as head coach in 1982. Head coach of Wales from 1978-1981, he relinquished it to Dai Watkins in 1982. He was elected into the WRL Hall of Fame in 2018.