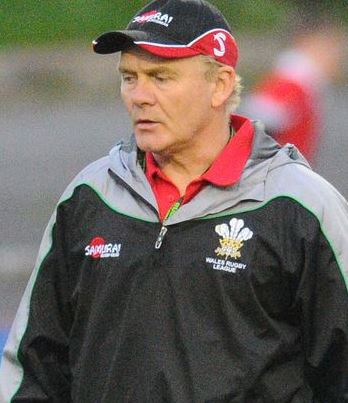 After kicking 428 goals in 142 games with St Helens and Salford and winning two Wales caps, Clive Griffiths joined the coaching staff at St Helens. He became involved with Wales as their our first Students World Cup coach in 1989 before being appointed as head coach of the revived Wales men's side in the 1991-92 season. He remained as Wales Students head coach until 1992,leading them to the semi-finals of that year's World Cup. His Wales men's side, full of top level rugby union converts, won the 1995 European Championship, then reached the semi-finals of the World Cup in both 1995 and 2000. Clive stepped down following the 2000 tournament after a memorable semi-final against Australia, but returned for a brief spell in 2009 as an adviser to new head coach Iestyn Harris. He turned to coaching rugby union but came back to League with Wales Students again in 2009, coaching them to the Four Nations title, repeating that in 2012 then leading Wales Students to the 2013 World Cup semi-finals. By that time, he was head coach of the new North Wales Crusaders side, leading them to a League 1 promotion and Northern Rail Bowl double, again in 2013. His success that year gave him the League 1 Coach of the Year award, but he quit in 2014 to continue his union career with Championship club Doncaster Knights before retiring in 2020.